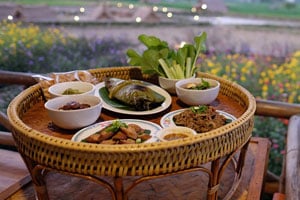 The cold weather is the reason why most foods contain a lot of fat, such as Ong Chili Paste, Hunglai Sai Sai Sai to help keep the body warm. Also, living in the valleys and the highlands near the forest. Vegetation in the forest to cook food such as cabbage, green vegetables, sweet bananas, banana, making local foods such as curry, green curry, banana curry, banana curry Bon

North foods, northern food, or Lanna food, there are many different kinds. Some foods have a long history. There are vegetables that are useful as a component. Has unique eating characteristics, so it is popular to bring wild plants to cook such as Cabbage, Banana, Pak Wan, making local food such as Kaeng Kaeng Kaeng, Kaeng Banana Curry, Northern food is another interesting food. The menu is quite diverse, whether it is curry, chili paste or salad. The type of food is similar to other regions. But the Northern food has a distinctly unique flavor For example, some vegetables are easily found only in the north. Because the northern region is full of mountains, there are many vegetables and herbs from the forest. Therefore get curry paste that contains only many herbs

Northern food is abundant and has different names from every region. We have compiled many recipes, boiled, stir-fried, curry, steamed, grilled, and try. Northern food. How to make it delicious. Northern food. What are the secrets?

Distinctive characteristics of the northern food For the northern food's uniqueness, Northern food is not popular with sugar. The sweetness of the food is obtained from ingredients used for cooking such as vegetables, fish, fat from animal oil, etc. Northern local food There is a special blend of eating culture from many people.

Northern Folk Dishes Northern region of Thailand In the past it used to be a part of the Lanna Kingdom. Is a kingdom that has prosperity The territory extends to neighboring countries such as Myanmar and Laos. Food of the Lanna people Therefore receiving various cultures from many different tribes

Food in the northern region is eaten with sticky rice as a staple food and is paired with chili paste, such as Nam Phrik Ong, Nam Phrik Ong, and many types of curries such as Ho Hae Kaeng curry, etc. The weather in the north is cold. Therefore is different from other regions of Thailand Most Northern Thai foods are very fat, such as Ong Chili Paste, Hunglai Sai Sai, which helps to warm up the wild plants that are often used in Northern dishes such as cabbage, banana, and sweet vegetables.

Northern people will eat sticky rice as staple food. Northern Thai food Northern region is a land that has flourished since past times, a land of history. Art culture Traditions.

In the past, the northern region of Thailand used to be part of the Lanna Kingdom. During this empire Has spread to neighboring countries such as Burma, Laos and people from various lands to immigrate to settle in this land. Therefore receiving various cultures from various peoples into daily life, including food from the northern region Consisting of sticky rice as a staple food.

There are different types of chili paste such as young chili paste, Ong chili paste, there are many kinds of curry such as Ho Kaeng curry, Kaeng curry, and also has sour pork, sausage, pork and various vegetables. The cold weather is the reason why most foods contain a lot of fat, such as Ong Chili Paste, Hunglai Sai Sai, to help keep you warm In addition, living in the valleys and in the highlands near to the forest, so popular to bring vegetation in the forest to cook, such as cabbage, banana, banana, sweet vegetables, resulting in local foods such as curry, banana curry, banana curry and bon bon.

Local Thai food in the northern region 9 menus that are unique and delicious. Although it is not well-known to foreigners like Tom Yam Kung or Massaman, these "Northern dishes" are worth the taste. The survey was conducted by Austin Bush, a photographer and writer. That has gone to experience the deliciousness of Northern food in Thailand.